Having spent the best part of the past five years  capturing the beauty of the east coast of Ireland , it is now time to explore the rest of our country’s wonderful rugged coastline.

An invitation to give a talk at Letterkenny Photographic Club over the May bank holiday weekend  a few weeks ago provided me with the perfect opportunity to explore the magnificent beaches in this breath taking county.

Myself and fellow photographer, Rodney O Callaghan travelled up on the Friday and based ourselves in Dunfanaghy which was an ideal base for exploring the northern peninsulas.

Our first port of call when we got to Donegal was at Dunlewy Church overlooking the Poisoned Glen at the foot of Errigal.  There we met our friends, photographers Trevor Cole and Ashley Kydd of Alternative Visions.   I have admired their work for some time now . They have captured the beauty of Donegal so well in their images , in addition to having portfolios of images that span all over the globe.   Their framed work is displayed in the newly renovated Arnolds Hotel in Dunfanaghy and is well worth a visit if you are in the area.   Over the weekend Trevor and Ashley gave us a wonderful tour of some of their favourite locations, generously sharing their local knowledge and also bringing us to locations we would never have discovered for ourselves.

My favourite location over the weekend was Fanad Lighthouse on the Fanad peninsula, which has some of the most striking cliff scenery in Ireland.   It has it all, crumbling cliffs, breaking waves and lots of golden sandy beaches.   The lighthouse is built on a rocky outcrop.    On the Saturday morning we came here for a sunrise shoot.  We were pleased that the sun played ball having risen at an unGodly hour to get there an hour before sunrise.   We took some shots up at the lighthouse for the first 45 minutes.   The weather changed then suddenly , the Heavens opened and we had to run back to the car for cover.    After about 40 minutes the rain stopped and we were able to get some more images… this time from a different vantage point, the cliff top opposite the lighthouse. 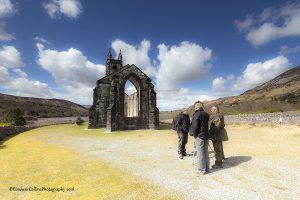 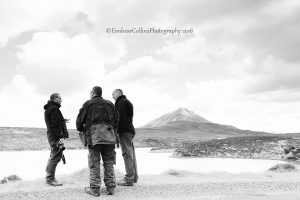 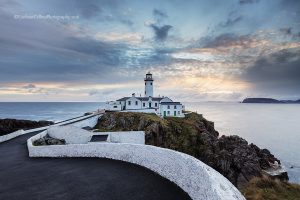 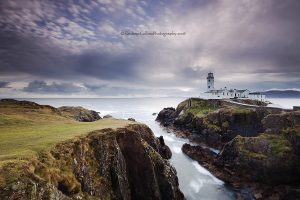 On our second visit to the location, it was midday, and the light was quite harsh which proved challenging.    Wanting to get a different perspective to my previous images I climbed ( crawled ) down onto the small rocky beach in the inlet adjacent to the lighthouse.   It took me about 20 minutes to get across the rocks as they were so slippy.    Thankfully my efforts were not in vain , and I came away with an image of the waves crashing on the shoreline which is what I had hoped for .   It would normally be quite dark down on that  narrow beach as there are high  cliffs on either side.. but the strong midday sun brightened up the cliffs nicely to my left.  For those of you interested, I used a Lee Little Stopper here to slow down the shutter speed.   I did not use any grads as it would have rendered the sky too dark. 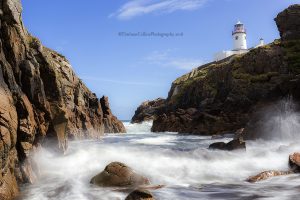 Whilst in the locality we also visited Great Pollet Arch nearby.  This is a spectacular sea arch towering out of the ocean.  Carved out of solid rock by the Atlantic ocean.   We did some long exposures from the cliff tops overlooking the arch and then moved down to the adjacent pebble beach for a different perspective on the scene.   I definitely want to make a return visit to this location as I did not get the shot I had hoped to get here from the beach. 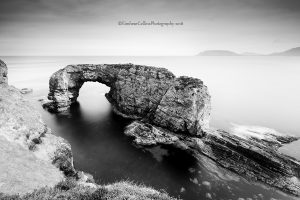 Magheroarty beach on the shores of Lough Swilly is just one of the many fantastic beaches we visited. .  It is a big horse shoe shaped beach with Ireland’s biggest sand dune at the very end.  It was a perfect location for capturing those big breakers !  The further we walked down the beach, the bigger the waves got ! 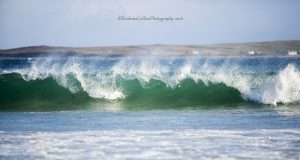 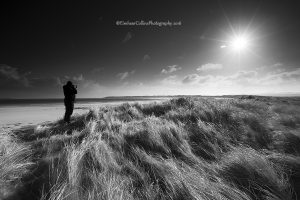 The beauty of a photography trip to a place like Donegal is that the dramatic coastline makes it good for photography throughout the day , and not just at dawn and dusk , which are the only times I usually head out for a seascape shoot.  Most of our images from Donegal were shot during the day time.  Working with the big waves to capture great sweeping backwashes, and with dramatic backdrops in the frame as well more than compensated for the absence of dawn/dusk colours.   It was a change for me to see some nice blues skies in my images .   That was certainly a first for me since my passion for seascapes was ignited in June 2011.     We visited the Murder Hole beach on the Rosguill peninsula on the bank holiday Monday.  Possibly one of the most beautiful beaches in Ireland.   It is off the beaten track a little and you have to walk across the fields and dunes to access it.   It was well worth it though as there was great action in the sea  .  I had fun capturing those great sweeping backwashes from the receding waves , which I love to do. 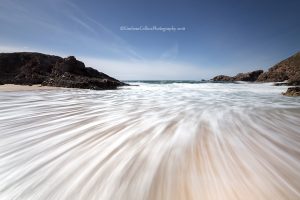 The weather was quite mixed over the course of the weekend and as a result, much of our time was spent wiping and cleaning rain drops off our filters.  I would have been lost without my Zeiss wet tissue lens wipes which I have started using in the last few months ( thanks Bryan Hanna for the tip ! ) . They are far better for the seascapes than traditional lens cloths which tend to leave the filters quite streaky.  It rained non-stop during our visit to Tra Na Rossan beach on the Rossguil peninsula one evening.   I used a shower cap to keep my equipment dry , latching it over the top of the filters.   Despite the incessant rain, the light was quite nice that evening and we both got images we were happy with. 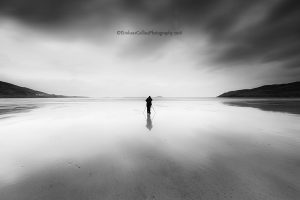 I like to include people in my seascapes whenever possible as it lends a sense of scale/ awe to the image.  Rodney was perfectly positioned for this purpose in this image taken at the Golden Arch, near Horn Head. 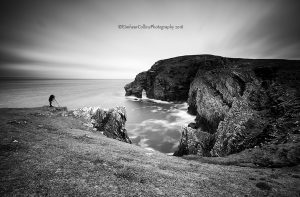 Sometimes too on the beaches , you are faced with wide open spaces , and although the scenery may look very beautiful , the photo can look flat with nothing of significant interest to focus on.  Including a person in the frame can be very effective as it provides an interesting focal point and brings a new dimension to the image.

No trip to Donegal would be complete without a trip to Bad Eddie at Magherclogher beach, Gweedore. ! It must be the most photographed shipwreck in the country .   We visited the location for sunset one evening . The tide was out further than we would have liked , but there was wonderful light in the sky and nice cloud formations.  The tide was coming in during our shoot , and had reached the boat about 30 mins after the sun had set.   There was just enough light to take a few more shots then. 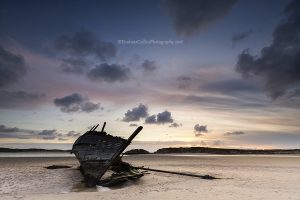 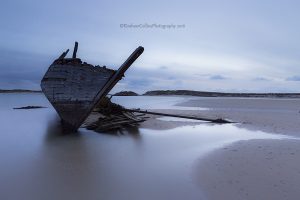 In addition to visiting all these beautiful beaches and many more locations, we also had a very enjoyable visit one of the day’s to Rita Wilson’s Gallery in Downings.  I have been a fan of Rita’s work for a few years now and it was a pleasure to finally meet her and view her framed images in her bright and airy gallery . 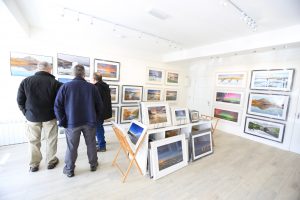 Having spent a few very enjoyable days capturing the beauty of Donegal’s dramatic coastline , it was time then for my talk at Letterkenny Photography Club.  Members of neighbouring photography clubs, Buncrana , Dunfanaghy and Carndonagh also joined us on the night at the Regional Cultural Centre.  As always it was lovely to meet photographers I had engaged with on facebook for some time but never actually met.   Also great to meet new friends !  I gave a digital presentation of my work which lasted about 90 mins  and had a selection of mounted prints with me as well .   It was a very pleasant  evening with plenty of questions and interaction with the audience.     We are very much looking forward to a return visit to Donegal in September where we will be hosting a seascape workshop with Letterkenny Photography Group. 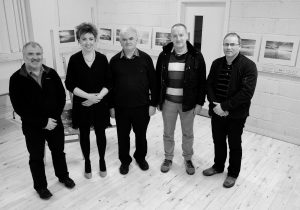 With thanks to Ciaran Cunningham for the image .

Our trip to Donegal was exhilarating.   We both enjoyed exploring the stunning beaches and spectacular views . It certainly ignited in me a passion for the Donegal coastline.  It is one of the most beautiful counties in Ireland and provides some of the best waves the Atlantic Ocean has to offer.

New friendships were formed and it is always such a pleasure to spend time with like-minded people who share your passion for seascape photography.

With thanks to the members of Letterkenny Photography club for inviting me down to give a talk at their club and to all the photographers who were there on the night  for their warmth and hospitality  . A special word of thanks to Jim Hyland for coordinating all the arrangements .

Thanks also to Rita Wilson for taking the time to show us and talk about her work in her beautiful gallery .

Thanks to Trevor and Ashley for their hospitality and their generosity with their time and their local knowledge  .

Last but not least, thanks to Rodney O Callaghan for all his assistance which was very much appreciated.

6 thoughts on “Recent Trip to Donegal”